Making the Most of Meals : Harvard Works with Local Nonprofit to Shift Food Surplus to Families In Need

In the Fall of 2014, Harvard University Dining Services launched an effort to address chronic hunger among its neighbors in Cambridge and Boston by partnering with the local nonprofit Food for Free to donate nearly 2,000 nutritious meals each week to families in need. The initiative builds on Harvard’s long commitment of community engagement, which includes extensive partnerships with local schools and creating and preserving affordable housing.

To ensure that breakfast, lunch, and dinner are available for every undergraduate, Harvard University Dining Services necessarily produces more food than is actually consumed. In the past, excess fresh food has been composted. The new program ensures that untouched food is instead provided to those who need it.

“This is a new initiative ― a new type of idea,” said Sasha Purpura, executive director of Cambridge-based Food for Free. “The food from Harvard is very healthy, easy to reheat, and simple to serve. None of it has to be cooked from scratch, which is not only time-consuming, but oftentimes not possible as some of our recipients live in motels or on the street where cooking options don’t exist. This is a new way of doing food redistribution and it has really been making a difference in the battle on hunger.”

In Harvard’s 13 undergraduate dining halls, the challenge is to maintain a menu that matches the demand of students, 99 percent of whom live on campus and participate in the meal plan. As such, every location has a modest amount of food beyond what is consumed ― including salads, soups, main dishes, and sides. On an average day, the dining halls feed breakfast, lunch, and dinner to more than 6,600 students. That comes to nearly 20,000 meals a day. While HUDS continually monitors consumption, it is impossible to predict precisely how many students will eat and how much they will eat at any given meal, leading to inevitable “leftovers.”

The process is simple:

In a typical week during the academic year, Harvard may donate up to 2,500 pounds of quality food that was never served. Given that the average meal is 1.3 pounds, each week approximately 2,000 meals are donated to needy families. In the 2014-15 school year, Harvard donated more than 58,000 pounds of food.

“This is a sustainable program that reflects Food for Free’s mission to address the needs of local families on a daily basis,” said Purpura. “It is a model that is replicable and we hope that our pilot program with Harvard will both feed families and raise awareness at other institutions of higher learning and organizations in Cambridge. We are incredibly excited about this partnership and are looking forward to doing much more in the coming months.”

There is no cost for the program. The Food Donation Connection, a national for-profit organization, donates its services and supplies (the online log, bags and scales) to non-profit entities such as Harvard. The group making the donation is also connected with a local food salvage group.

When the program started in September 2014, it was at a single dining hall, Annenberg, the University’s largest. Over the subsequent months, it was rolled out to all undergraduate dining halls. Over the summer and fall of 2015, it was extended to four retail locations and catering. From September 2015 – February 2016, an additional 46,000 pounds of food have been donated.

Because implementation is so simple, the only major challenge is to assure local authorities that the “Good Samaritan” laws protect the University from liability in the event of some food concern.

Since the program’s implementation at Harvard, we have worked to connect other Universities with the opportunity, both through one-on-one introductions (such as with Tufts) and education programs such as the NACUFS Regional Conference (where an interest session was offered) and a NACUFS Sub-Regional program, to be held on April 14 at Harvard. 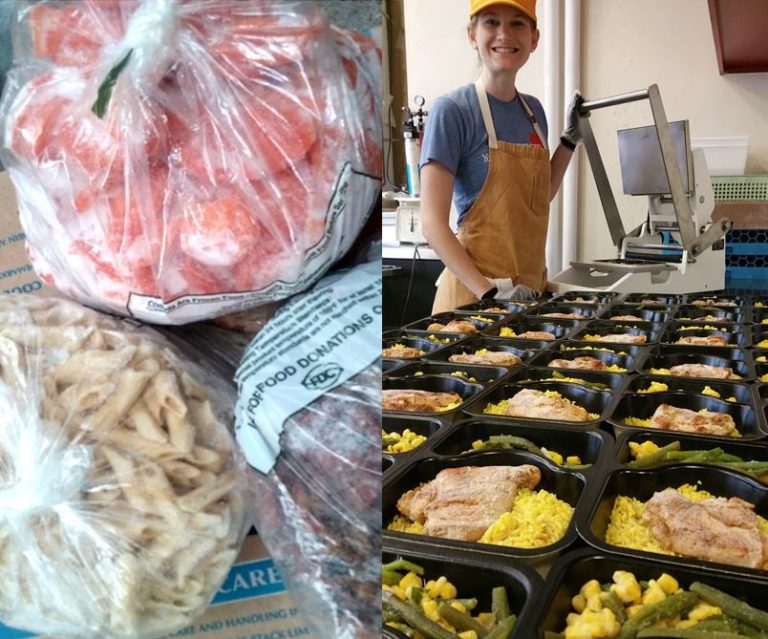